AN ALTERNATIVE NARRATIVE OF NATIONALISM 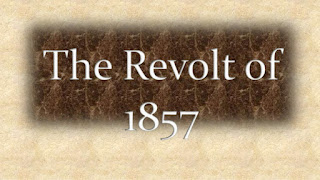 Response to a debate: Hindus and Muslims did participate in the freedom movement under Gandhi and fought under one flag in post-independence wars. But never, never did they unite with reverence and respect for each other's religions as in 1857. The concept of religion in 1857 worked as a uniting, and not a divisive, force. Secondly, 1857 was the uprising of the peasantry. Even sepoys were all peasants. This is different from the Congress led freedom movement. Middle class, a product of the British education system, dominated the latter. 0 The men and women who fought in 1857 had roots in pre-British India of indigenous categories and practices. The same cannot be said of those who fought in the post-1857 phase. Where else but in 1857 will you find the Hindu religious peasantry going to Delhi to install a Muslim king? Where else will you find Muslim cavalry placing Nana Sahab Peshwa, a kattar Brahmin, on the throne of Kanpur? Apart from a brief perio
Post a Comment
Read more 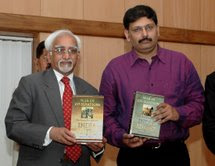 The Vice President of India Shri Mohd. Hamid Ansari released the book titled “War of Civilizations: India AD 1857” –(Volume I -The Road to Delhi; & Volume II- The Long Revolution) authored by the writer/journalist Shri Amaresh Misra at a function here today. Addressing on the occasion, the Vice President said that writing such a voluminous book is an extraordinary success. Referring to the sources in the book he said that these sources are well-authenticated. He said that 1857 revolt was a revolution which failed because it was not sufficiently organized and many people did not join it. Congratulating the author the Vice President said that he has done a great service to the nation. The book showcases a West, the West has never seen, an Asia which Asians are unaware of and a story of the ‘Indian Mutiny’ which has never been told before. The whole Asia-Europe conflict gets a new slant. Accessible to scholars, historians, lay readers, students of military adventure and battles, ideo
4 comments
Read more

150 Years Later by Bibek Debroy This is a book of great courage and perseverance. Authoring a two-volume magnum opus of more than 2,000 pages, on any subject, is not easy. Amaresh Misra’s earlier books on Lucknow and Mangal Pandey establish his interest in events centred on 1857. The first volume is better written than the second. However, this is more than compensated by extensive research. There is also an interesting experiment in the first two chapters of the first volume (concerning Azimullah Khan and Azeezun Bai) of using the fiction genre to describe events. This works quite well, except that the reader can’t always distinguish fact from fiction. But this isn’t an experiment that is repeated subsequently. The Misra propositions can be segregated into a few strands. Some have been established fairly convincingly, others less so. First, the Mughal state came close to “establishing a mercantile industrial capitalism”, with the pressure for change emerging from a small town and rur
1 comment
Read more

A work of monumental proportions R.V. SMITH A goldmine of information for researchers. War of Civilisations: India AD 1857 (The Road to Delhi and The Long Revolution); Amaresh Misra, Rupa, Rs.2500. The year 1857 marked a watershed not only in the history of India but of the subcontinent. Call it Mutiny, Revolt or First War of Independence, its impact cannot be belittled. No wonder there is a plethora of publications on it. To this recently has been added War of Civilisations : India AD 1857 in two thick volumes — The Road to Delhi and The Long Revolution by Amaresh Misra. For those looking for variety in “Mutiny” literature, here is something that satiates both fact and fancy. The first volume First The Road to Delhi: The Battle of Plassey (1757) followed by the Battle of Buxar (1764) put the English firmly on the road to Delhi. A far cry from 1610 when they posed as poor traders in Jahangir’s court at Agra to seek preferential treatment in trading rights in the Moghul empire. How tra
Post a Comment
Read more

February 02, 2008
Indian perspective Amaresh Misra’s book shed new light on the 1857 Revolt Amaresh Misra is a film critic turned war analyst. The guy who acquitted himself creditably writing about films most read about, and only a few saw, is busy showing another facet of his personality. He has just authored an unexpected tome on the Revolt of 1857 or, as some call it, the First War of Independence. Amaresh calls it “the world’s first holocaust”. Brought out by Rupa, War of Civilisations: The Road to Delhi and India AD 1857 is not the first time Amaresh is walking down the history lane though. Interest in history Having already penned a biography of Lucknow in Lucknow: Fire of Grace and a biography of Mangal Pandey, Amaresh is well equipped. “My first book was on history. My interest in history run parallel to my love for films,” says the Mumbai-based Amaresh, adding, “I always admired the work of historians like Professor Irfan Habib and others, but they don’t ask new questions. My stint as a
Post a Comment
Read more

A Clash on the idea of Progress

January 28, 2008
Financial Express 28th January 2008 As the massively underplayed, almost invisible 150th anniversary celebrations of 1857 wind down, one may well wonder why a movement that gave India’s erstwhile colonial masters their biggest scare ever, defined almost all their following policies, had such a long memory in oral history been so downplayed? Irrespective of the search for nomenclature defining its nature — mutiny/ revolt/ uprising/ petty bourgeois/ jacquerie — similar movements in other nations have had state-driven, passionate searches to unearth the smallest detail. What was its exact extent — geographically and in its scope? What were its socio-economic underpinnings? Who participated, who reaped the benefits by siding with the British? How many people died in the events of 1857? Why have we as a nation so bought into the British opinion that it was a mutiny? Fortunately most recent studies have debunked that it was just a soldiers’ revolt, but the knowledge has largely been confine
Post a Comment
Read more

January 14, 2008
HISTORY: What Every "Ugly American" Must Know about the "Civilized British" Aug. 24, 2007 (LPAC) One of the tragedies of English-speaking British colonies is that their history under the British rule was written by the British historians, or by those natives who were trained by the British historians. However, it seems the time has come to record history in its true light-- at least so in India. Amaresh Misra, writing about India's first war of independence in 1857, in his recently published book, In War of Civilisations: India AD 1857, said that there was an "untold holocaust" that caused the deaths of almost 10 million people over 10 years, beginning in 1857. British-fed historians, claims Misra, have counted only 100,000 Indian soldiers who were slaughtered in savage reprisals, but none have tallied the number of rebels and civilians killed by British forces desperate to impose order. "It was a holocaust, one where millions disappeared. It wa
Post a Comment
Read more
More posts